The Isle of Wight Garlic Festival

Check out the videos from previous festivals:

Click here to buy your tickets or visit www.garlicfestival.co.uk

The gastronomic scene on the Isle of Wight has gone from strength to strength over recent years. The Garlic Festival is a great way to discover this and we are delighted to be joined by Robert Thompson this year. Robert is a big fan of garlic and an inspiring ambassador for the local Island food producers. He was the youngest UK chef to be awarded a Michelin Star. If you can't wait to experience what he does at The Garlic Festival this year, please head over to his restaurant THOMPSON'S .

Since it first started in 1983, the Garlic Festival has grown to become one of the largest events on the Island.

Attended by at least 25,000 people each year, it has been an astounding success largely due to its curious mixture of garlic cuisine, late sixties pop festival ambiance and country fair, coupled with plenty of entertainment for children and adults.

In the early '80s Newchurch Primary School had a question mark on its future. Their rolls went up and down from 50 to 100 and the Council had it marked for closure if no more could be done to increase pupils.

It lacked facilities, particularly requiring a large assembly hall that might double for a gym, concerts and other activities. The community also needed a football pitch and pavilion.

Meetings were held in the parish and the usual committee was formed which led to the formation of the Newchurch Parish Sports and Community Association. Marjorie Lanfear was the chairman. It was decided we needed a fund raising vehicle. Colin Boswell, who had just begun to successfully grow and sell garlic on his farm in the village, had just returned from the Gilroy Garlic Festival in Gilroy, California. He described to the village how this had become, in the space of five years, a brilliant fund raising vehicle for the small town of Gilroy, run and organised by all the charities and organisations in the town, it was now raising millions of dollars.

Roy Burrows, a local dentist, was the chairman of the fundraising committee. He seized on the idea. "Colin, you sponsor it, we'll run it" and The Isle of Wight Garlic Festival was born.

To our great surprise 5,000 people attended the first festival in 1983, way beyond expectations. In the following 20 years organisation improved, numbers increased to 25,000 and the festival became famous as a slightly quirky mix of 60s pop festival, country fair and tasting of garlic in all its forms.

Most importantly it raised sufficient money over the years to pay for a substantial rebuilding of the village school which now has 250 pupils and great OFSTED reports. The village also has a sports field, pavilion, astronomical observatory, recreation area at the rear of the local pub and local societies and groups receive annual grants.

In 2007 the village organising committee ran out of steam and the organisation of the festival has now been taken on by Island businessman, David Holmes, who continues to collaborate closely with The Garlic Farm. Local groups still assist in the running and the festival is as popular as ever. The original organising committee garnered their funds earned from the festival so well that, despite making significant investments in the villages infrastructure, there is still a substantial fund available for village projects and societies.

The third weekend in August is Garlic Festival weekend on the Island and everyone knows it. David Holmes, in conjunction with The Garlic Farm, provide a unique weekend to visitors and Island residents alike.

To find out more about the next garlic festival please visit:
www.garlicfestival.co.uk 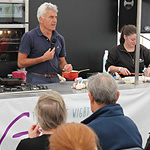 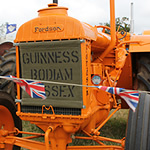 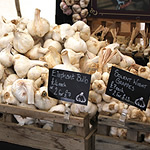 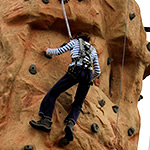 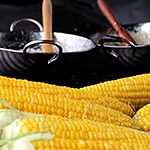 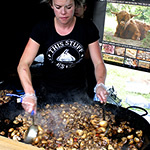